Video of Day One

On June 10-12, 2015, urban leaders gathered in Pittsburgh to share the smartest ideas, toughest challenges and real-life strategies for ensuring inclusive economic growth. We came, we saw, we connected. The workshop did more than use Pittsburgh as a conversational backdrop; the city is the physical backdrop for the projects, programs and people we met, growing Pittsburgh, every day. It was a packed few days, but the action shouldn’t stop there.

Whether you were a participant with follow-up to do, want to relive every moment or couldn’t attend and need to see what you missed, CEOs for Cities has packaged the play-by-play (complete with names, profiles, links and more) for The Innovative + Inclusive City workshop.

More than 250 changemakers came to Pittsburgh from 20+ cities. Zoom into the map for more detail, click on the plots to see who came from where. Want to get in touch? Take a look at The Innovative + Inclusive City attendees.

What did we do?

The Inclusive + Innovative City workshop began with an opening reception, in partnership with Create Festival, at SPACE Gallery on Wednesday, June 10.  Some attendees went from the reception to see the Pittsburgh Pirates battle the Milwaukee Brewers, others took in the Three Rivers Arts Festival.

We woke up early on Thursday, June 11, for breakfast at the Heinz History Center, listened to an opening keynote from Pittsburgh Mayor William Peduto and panel discussion framing innovative and inclusive growth, broke into small groups to talk about the awesome work being done to further inclusive growth in cities across the country, and were inspired by our lunch keynote Peter Sims, author of Little Bets, before taking off for five concurrent field trips around the city of Pittsburgh. Following the field trips, we again partnered with Create Festival for an exciting reception at Wyndham at the Point. We didn’t stop when the sun went down! Ending our night at Bill’s Bar + Burger for drinks and conversation with experts on inclusive economic growth.

Keynote speaker Toni Griffin kicked off Friday’s sessions with an inspiring address about designing cities to be more just and resilient. Four City Clusters followed with a PechaKucha-style lightning round, telling stories of successes and challenges in their inclusive cities. We then broke into facilitated groups to discuss practical steps for moving toward more inclusive cities. This was followed by an opportunity for City Clusters to meet to discuss next steps following the workshop. We wrapped up with words of wisdom from Pittsburgh Mayor William Peduto, and a closing panel discussing take-aways for cities.

The first day of The Inclusive + Innovative City workshop began with an early rise — breakfast at 6:30 a.m. and a morning keynote provided by Mayor William Peduto, City of Pittsburgh. Through his many years working in City Council and now as mayor, Peduto has helped transform Pittsburgh’s economy into a Med/Ed New Economy and in building a New Pittsburgh.

The morning session continued with a panel framing the idea of innovative and inclusive economic growth and its importance in cities today:

Attendees finished the morning with small group discussions about opportunities and challenges to inclusive economic growth. These discussions were facilitated by expert resources: 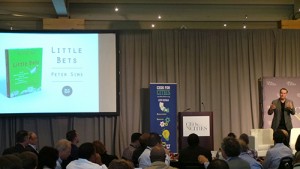 Following Peter’s keynote presentation, attendees broke into groups to experience the city on another level. Pittsburgh wasn’t just the theoretical backdrop for this workshop; it was our laboratory. Find follow-up links and names-to-note for your trips and tours, or catch up with the other city adventures:

Hosted by the Pittsburgh Cultural Trust and the Pittsburgh Downtown Partnership
The Pittsburgh Cultural District has seen one of Pittsburgh’s most historic transformations: turning a seedy red-light district into a magnet destination for arts lovers, residents, visitors, and business owners. The District is one of the country’s largest land masses “curated” by a single nonprofit arts organization, the Pittsburgh Cultural Trust. A major catalytic force in the city, The Pittsburgh Cultural Trust is a unique model of how public-private partnerships can reinvent a city with authenticity, innovation and creativity. Using the arts as an economic catalyst, we now have a world-renowned Cultural District that is revitalizing the city, improving the regional economy and enhancing Pittsburgh’s quality of life. Thanks to the support of foundations, corporations, government agencies and thousands of private citizens, the Cultural District stands as a national model of urban redevelopment through the arts. Over a period of 25 years, the Trust has restored historic theaters, constructed new performance venues, commissioned public art projects and developed unique urban parks and riverfront recreation spaces. Mayor Peduto’s goal is to build upon the success of the Cultural District and invest in the Golden Triangle of downtown by making the largest contiguous complete streets grid in North America.

Hosted by the City of Pittsburgh Department of City Planning and its many Uptown Partners
The Uptown neighborhood of Pittsburgh presents unique conditions that serve to simultaneously inspire and frustrate those who see its true potential. While strategically located between the economically vibrant Downtown and Oakland areas and across the river from the thriving South Side, the neighborhood has seen levels of disinvestment and deterioration that are not befitting such a well-connected neighborhood. The population has dwindled to just over 800 residents (excluding institutional residents, which bring the total to over 4,000). The resulting empty lots and buildings have created severe losses in property values. The commensurate reduction in street activity has further fostered a perception of an unsafe environment. Many properties have moved through tax delinquency, abandonment, acquisition, and consolidation. In many cases, under-utilization of land has created a situation where the most profitable land use is surface parking. Uptown’s future is in its hands. Trust is being built, and people are working together to build a new future together. The abandonment and demolition of the last several decades cannot be undone — the vacant lots must now be seen as an opportunity to build a new Uptown that is sustainable, economically viable, and ecologically sensitive — a competitive model for 21st Century urban development.

Hosted by the Urban Redevelopment Authority and Councilwoman Gross.

Councilwoman Gross talks about growth in the Strip District

The Strip District is a one-half square mile area northeast of downtown Pittsburgh and the food and produce heart of the city, best known for its retail produce and ethnic food stores, restaurants and coffee shops. “The Strip.” as it is familiarly known, is just that — a narrow strip of land in a flood plain confined by natural boundaries: the Allegheny River to the north and the extension of Grant’s Hill to the south. In the early 20th century the produce station was located in a small triangular building at 21st Street near Smallman Street and this intersection became the hub of the wholesale produce business in Pittsburgh. From the turn of the century through the 1920s, industrial buildings, shops, and homes along Smallman between 16th and 21st streets were demolished for the construction of produce warehouses and offices. Auction houses and large wholesalers lined up along Smallman; smaller dealers set up shops on Penn Avenue in existing retail buildings. In the 1950s there were 71 wholesale produce dealers in the Strip District. By the 1970s there were about two dozen dealers left in the produce terminal. Remaining dealers began to expand their businesses by opening retail stores on Penn Avenue and Smallman Street. Today the Produce Terminal building remains largely vacant and is a major redevelopment site for the City of Pittsburgh as efforts for adaptive reuse are considered.

The rise and fall of East Liberty is a familiar story in Pittsburgh. A thriving commercial center in the 1940’s and 1950’s, Pittsburgh’s “Second Downtown” declined rapidly in the 1960’s after an ambitious urban renewal program. At one time East Liberty was the third largest business district in the Commonwealth of Pennsylvania boasting six movie houses, a department store, a roller skating arena and hundreds of thriving retail businesses. The ill fated urban renewal project was an attempt to suburbanize East Liberty destroying the tightly-knit urban fabric to make way or large, one story retail buildings, huge parking lots and wide access roads. Entire blocks of houses and commercial properties were raised, the core of the business district was converted to a pedestrian mall and over 1400 government subsidized rental units were created minimizing the long tradition of home ownership in East Liberty. In the late 1990s, new leaders in East Liberty brought a sense of urgency to tackling old problems. They recognized that overcoming fragmentation and division by developing an aligned neighborhood had to be a top priority. Through a community-driven process, stakeholders developed A Vision for East Liberty. The plan highlighted community initiatives that represented the beginning of local investment and success, which became the building blocks for change. East Liberty was determined to reposition itself as a successful, self-sustaining community once again and has seen major successes in the recent decade.

On the three rivers, aboard the RiverQuest boat and guided by Riverlife staff 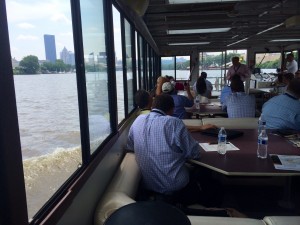 The reputation of Pittsburgh to those who have not visited is a city with a past mired in soot and smoke. Polluted rivers lined with mills. An urban landscape ravaged by industry, “hell with the lid off.” Fast-forward to the present, and you’ll find a different Pittsburgh. A surprising Pittsburgh that looks and feels nothing like what you’ve heard. A breathtaking city of rivers, bridges and hills, those industrial black clouds long gone. A city of character and innovation moving forward and reclaiming its natural assets. Though the transformation hasn’t happened overnight, there have been huge leaps forward as the Pittsburgh community has united to forge a plan for a new chapter in the city’s history. In 1999 a group of Pittsburgh community leaders, business owners, environmentalists and urban planners saw the need to develop a master plan for Pittsburgh’s most valuable asset: its rivers and their miles of shorelines. Since then more than 80% of the 13-mile Three Rivers Park loop has been established and improved for public use. Key projects comprising the next phase of the Park are under construction as a part of our current capital improvement projects, and Riverlife has a plan in place to complete the remainder of the Park over the next ten years.

The second day of The Inclusive + Innovative City workshop began with another early rise — breakfast at 6:30 a.m. and a morning keynote provided by:

The morning session continued with a lightning round featuring leaders from four Clusters, outlining what their cities are doing to expand inclusive economic growth:

Attendees then met in small groups to share practical next steps for moving toward innovative, inclusive economic growth. These discussions were followed meetings of City Clusters to talk about what they would work on when arriving back home.

He was followed by a panel discussing what cities can do to move toward more innovative, inclusive growth. The panel featured: